Love a steak and love Melbourne then head to Rare Steakhouse and get it your way!

One of three Rare Steakhouse restaurants in Melbourne

I love travelling and this always means trying new restaurants along the way.  Wow, that’s great for a person like me who loves food as well.  At home we often eat out once a week and love to try all types of restaurants and cuisines.  The difference between choosing a restaurant in your home town and when you’re travelling is the fact that at home you get ideas and recommendations from friends and family and reviews in your local newspapers but it’s a little bit harder when you are travelling interstate or overseas as you may not know the area or what is available and/or good.

So last time we visited Melbourne we asked the concierge in the hotel where we should go for dinner.  He suggested the steakhouse around the corner and kind of pointed us in the right direction.  As it was mid-afternoon we decided to go for a walk to see if we could find this restaurant and check out the menu.  We were staying on the corner of Spencer and Collins Street in the CBD and the steakhouse is on King Street, only a few blocks away (Rare Steakhouse at 42-44 King Street Melbourne).  We got a little side tracked but found it eventually! 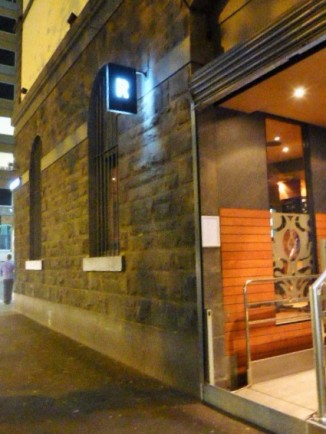 The menu was quite extensive offering numerous cuts and sizes of steak as well as ribs, chicken, lamb, fish of the day and a good selection of specials and entrees.  Sounded good, so we went in to see if we could secure a table for dinner.  We were greeted by the very friendly and happy staff who were only too happy to book us in.

7.30pm, dinner time and we were hungry.  We arrived and were seated at our table amongst the many in this restaurant.  It is quite a big place spread over two levels and it was very busy.  That is a good sign, busy, most tables occupied and there was a steady stream of people coming and going.  Now we are at a steakhouse so what better place to order, yes you guessed it, a steak!  Only problem now was what type, size and sauce do you have.  Too many choices. With our orders taken for both food and drinks we settled in and relaxed with our complimentary bread served with balsamic vinegar and olive oil. 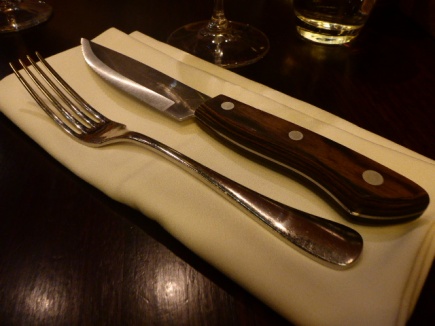 Can’t have a steak without a decent steak knife!

There was only one thing missing and we were getting a little bit thirsty so we got the attention of the waitress to follow up on our drinks order.  Drinks arrived, wine for me and a beer for Wayne, and we were offered more bread but we declined.  Wanted to save some room for our steaks, which being described as premium in quality and graded by Meat Standards Australia, sounded so good it got our mouths watering.

Dinner arrived, beautifully cooked steaks served with baked potato and our choice of sauce, I chose blue cheese sauce and Wayne had the green peppercorn sauce.  We also had a side of roasted field mushrooms with garlic butter and feta cheese.  Looked good, smelled nice so let’s eat.

Overall the meal was nice, steaks cooked and rested well but it would have been better if the plates had been warmed as the meal went cold rather quickly and the potato, although buttery and fluffy, was only lukewarm. As well the mushrooms weren’t overly hot and lacked that garlic hit I would have hoped for.  The sauces were served in gravy boats and both were flavoured well and not over powering so enhanced the flavour of the steaks.

Other than the slowness of the drinks service the wait staff were pleasant and helpful, offering toothpicks at the end of the meal which you don’t get often.  The atmosphere gave the impression everyone was enjoying themselves and the food.  Although it was a bit noisy it wasn’t noisy to the point of not being able to hear each other’s conversations so we were able to relax and chat over our meal.

All in all this was an enjoyable meal, pleasant atmosphere with happy, friendly wait staff.  The prices were reasonable with steaks ranging from $24 to $65 depending on the size and cut of the meat.  Sides included salads, chips, vegetables and more at $8.50 per serve with enough options from the starters and deserts to keep most people happy.

We later found out there are three steakhouse locations in Melbourne city so no matter where you are staying there should be a Rare Steakhouse within easy access, so go out and give it a try.  But if you want a preview head to their website at www.raresteakhouse.com.au and check out the menu and get those taste buds watering.

Let me introduce myself. I am an American born Australian bred girl with an appetite for good food, travel and a bit of adventure. My family has travelled a lot due to my dads work and I suppose this is what has given me the passion to get out there and see as much as I can and do the things I want. I hope I can bring you a bit of fun, laughter and a few good recipes. Enjoy and be happy always!
View all posts by DonnaRae →
This entry was posted in All Things Food and Travel from Attractions to Products, Home, Reviews and tagged Australia, Food, Melbourne, Restaurants, Reviews, Steak, Steakhouse, Travel. Bookmark the permalink.
Loading Comments...
%d bloggers like this: